The Sumerian Ruby (シュメールのルビー, Shumēru no Rubī) is an Eureka currently embedded inside the body of Vivian Blanchard, coincidentally an Eureka-compatible human. It is related to the practice of Metal Manipulation (金属操, Kinzoku Misao; Literally meaning "Metal Operation")

As it's inside the body of Vivian, the current appearance of the Ruby is unknown. On the other, the glow of its manifestation can be seen coming out of her chest as a bright signal, that keeps glowing during the time Vivian is making voluntary use of it.[1]

Molds of the Ruby are said to allow the forging of bronze alloys.[2] Therefore, the powers granted by this Eureka are related to metals, that can be protruded from the user's body. When used, the body and clothes of the user gains a metallic aspect and several dark tattoos drawn on it.

Crescent Cutlass: The user creates long blades in the front side of their legs, and then performs a backflip with the blades' edges facing the opponent, efficiently cutting it vertically.[4]

Cross Cutlass: The user creates long blades in the outer side of their arms and in the front side of his legs, subsequently jumping at the opponent and swinging the arms' and the legs' blades in a X pattern, efficiently performing a crosscut in the opponent's body.[5]

It should be noticed that a lack of control over this Eureka leads the user to uncontrollably protrude metallic spikes from random parts of their body, leading to an unsightly appearance of the same.[7] During the time the powers are being used, the user's eyes gain a an hexagonal drawing around their iris, that resemble a gemstone. 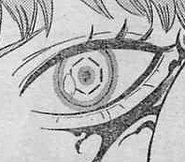 Vivian's eyes while using the Ruby.

Vivian's appearance with the Ruby uncontrolled. 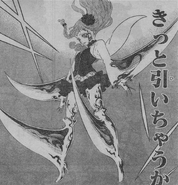 Vivian's appearance when using the Ruby. 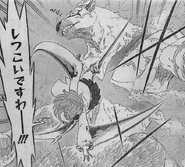 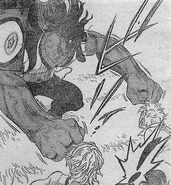 Dodomekis unable to move due to Metallic Poison inside his body.

After consuming a peculiar Hungry Joker Pill, non-hybrid user is able to artificially enhance their Eureka-compatibility and rises to the same power level as that of user whom possesses a hybrid blood.

Rapid Cutlass: After evolving to a higher level, the user is now equipped themselves with six separate blades. By skillfully utilizes all of them, they could successively slashed their opponent from six different directions at high speed.[9]

When in this form, the user is now able to completely envelop their body with metal in which takes the shape of an actual armors. The armors are consist of a headpiece, breast plate, gauntlets and boots.[8] Their irises marks had also been slightly altered in which the normal marks are now surrounded by another layer of the same shape but with additional lines protruding from every corners.[10] 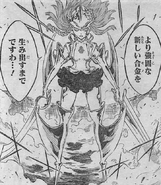 Vivi's appearance when in the Enhanced Form.

The Ruby is said to be the world's oldest alloy. Only through the discover of molds of this Ruby the Sumerian civilization managed to create bronze alloys, as it exceeds bronze by far.[2]

6 years prior the start of the series' events, an unknown incident embedded the Ruby inside Vivian Blanchard, that coincidentally was an Eureka adapter. Due the inability of her parents at removing it from her, she was abandoned. Some time later, she was found by the White Joker organization, that helped her at using her powers, though the young lady still wishes to get rid of it.[11]

In fact, the domain of the bronze alloy was so significant in antiquity that the Bronze Age was named after the metal, with the Sumerian civilization being a pioneer in the use of it and in the practice of metalwork. Bronze, however, it's usually derived from copper and tin, elements that doesn't constitute the ruby.

The Sumer (𒆠𒂗𒂠, ki-en-ĝir; Literally meaning "land of the civilized kings" or "native land") was an ancient civilization and historical region in southern Mesopotamia, modern Iraq, during the Chalcolithic and Early Bronze Age. Their feats include draining the marshes for agriculture, developing trade, and establishing industries, including weaving, leatherwork, metalwork, masonry, and pottery.

Retrieved from "https://hungryjoker.fandom.com/wiki/Sumerian_Ruby?oldid=11438"
Community content is available under CC-BY-SA unless otherwise noted.