The Pythagorean Hammer (ピタゴラスの金槌, Pitagorasu no Kanadzuchi) is an Eureka currently in the possession of Alan Blackman. It is related to the phenomenon of the Acoustic Resonance (共鳴, Kyōmei; Literally meaning "Resonance").

It looks like an ordinary worn out hammer, with a large, rounded head with a triangle symbol in the middle, and two circular plates on its edges, that are the impact areas. The triangle symbol itself is further decorated with three circles, one on each corner. The hammer's handle is relatively small, but sized to be well-held.

To activate the hammer's power, the user only need to simply tap the hammer onto the users body, usually onto the forearm. Upon impact, sonic waves are emitted from there.[1] An adapter can obtain the knowledge inherent to it by hearing the sound of it being battered.[2]

Once the Hammer is tapped on the body of the user, that body part becomes able to emit sound waves and manipulate their resonance. It's also implied that by hearing the sound of it being used, an adapter can obtain the knowledge about Musical Tuning.

Sound Amplification: After the reverberating points are set in the opponent's body, and if the user is skilled enough to match the amplitude of the waves in a constructive interference aspect, such amplitude increases vastly. Then, with the user acting as an input, they are able to amplify the output, increasing the sound wave's intensity to a point that induces a destruction phenomenon which blows up the body of the opponent.[4]

Healing Frequency: The user changes the frequency of the sound so the vibrations affect a body's molecules to activate them and accelerate the body's healing process.[6]

While using the Hammer's powers, the user's eyes gain a triangle, similar to the one seen in the Hammer's head, drawn around his iris. Also, when controlling the waves' resonance, Alan points at the target with his index and middle fingers, while keeping the thumb up and the others closed.

Some improvements and developments were also made to enhance the use of the Hammer. Alan, for an example, wears headphones highly sensitive to sound vibrations, allowing him to locate disturbances from far distances[7] and to recognize a specific set of sounds.[8] The execution of experiments to discover about the Hammer's abilities by Mira also made her body supportive to the usage of the Hammer by Alan.[9] 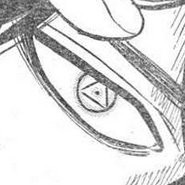 Alan's eyes when using the Hammer. 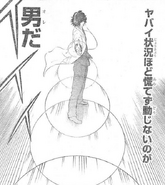 Alan blowing up a monster with his Sound Amplification.

After consuming a peculiar Hungry Joker Pill, non-hybrid user manages to artificially enhance their Eureka-compatibility and rises to the same power level as that of user whom possesses a hybrid blood.

When in this form, the user is now surrounded by several circular sound-like barriers and the Hammer had also receives a transparent coating where the said coating elongated and tapered at a single direction.[11] Their irises marks had also been slightly altered in which their normal marks are now have additional lines protruding from each edges.[12] 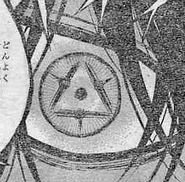 Alan enhanced appearance from behind. 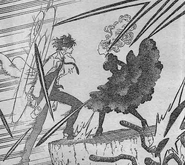 Alan moving at the speed of sound.

Crushing Wave: Once Heidi and Alan activate their powers, they're able to produce a devastating sonic wave that crushes everything in every directions, except in a small are that protects themselves and allies. They stand in the area as well, each one pointing to a side where the wave is being created, therefore creating an Omnidirectional Wave-Shaped Destruction. It was strong enough to destroy everything, from the floor to hard wreckage, inside a White Joker's base.[14]

The Apple and the Hammer whitening.

Around the 5th century BC, The Hammer was wielded by a blacksmith in the Ancient Greece, who caused the sound that eventually led the mathematician Pythagoras to discover the "Pythagorean Scale", the oldest musical scale one could also call the base of music.[15]

At some point, it was obtained by Alan Blackman, a member of White Joker. A series of experiments were made with it, during which Mira exposed herself to various of the hammers' different sound waves, a process that almost cost her life. However, it ended up turning her into a suitable partner for Alan.[16]

One of the White Joker's missions was to expose a forgery of the Hammer in the British Royal Museum, where Alan worked as curator and a secret base of the organization was located.[17] The plan was to use the replica as a bait to lure and attract a Mavro to defeat him and obtain the Eureka in his possession, which despite some contretemps was successful.[18]

The Hammer's powers and characteristics are based on a legend involving the Ancient Greek mathematician Pythagoras, in which he discovered the foundations of musical tuning by listening to the sounds of four blacksmith's hammers, which produced consonance and dissonance when they were struck simultaneously.

Pythagoras of Samos (Πυθαγόρας, Puthagoras) (about 570 – about 495 BC) was an Ionian Greek philosopher, mathematician, and founder of the religious movement called Pythagoreanism. He was born on the island of Samos, and might have travelled widely in his youth, visiting Egypt and other places seeking knowledge.

Retrieved from "https://hungryjoker.fandom.com/wiki/Pythagorean_Hammer?oldid=11412"
Community content is available under CC-BY-SA unless otherwise noted.