The Newtonian Apple (ニュートンのリンゴ, Nyūton no Ringo) or the Black Apple (黒いリンゴ, Kuroi Ringo) is the first Eureka that has been introduced in the Hungry Joker series. It is currently in Heidi's possession. The Apple is an Eureka related to the phenomenon of the Universal Gravitation (万有引力, Ban'yū Inryoku).

It looks like an ordinary apple with a single stem protruding at the top, but with an intense black color and a curved stitch-like drawing at the lower front, making look like the Apple is smiling. Its origins are unknown, only that it's been existed since the 17th century. Its structure is the same as the normal apples, with the difference that it's able to regenerate itself after having a part of it removed.

In order to activate the Apple's power, its adapter has to bite and ingest it, and, as the apple slowly regenerates after being bitten, the user can use the Eureka's power as many times as possible.[1] It's also been shown that a removed part of the Apple doesn't regenerate, which however doesn't affect its normal restoration.[2] To get the knowledge inherent to the Apple, an adapter chosen by the Apple itself must drink the juice of the fruit instead of eating it.[3]

When the Apple has its juice drank by an adapter, it grants them the knowledge about the Universal Gravitation, that consists in the principle that every point mass attracts every other point mass.[4] The powers obtained when it's eaten by an adapter are therefore related to this law, as the user can control attraction forces and their several aspects in a certain area and between the bodies contained therein. As gravitational force is a physical quantity that depends on the masses and distance between bodies, and these aren't changed by the user when using his powers, it can be assumed that their nature consist in the abrupt alteration of the Gravitational constant in the area affected.

Gravity Pull: The user can increase the attractive force of a certain body to make objects to be thrown at it with great force.[6] This also makes them able to increase their own gravity to make opponents and objects to be attracted to them, prompting them to launch physical attacks.[7] Additionally, they can also intensify the gravity of the Earth to make the target(s) "heavier" and restrain them, with a force strong enough to crush the ground itself, creating a crater.[8][9]

Gravitational Wave: The user is capable to perform this movement only after taking two successive bites of the Apple, thus enhancing their powers. They wave their arms down and make a wide linear area in front of them to be crushed by a strong gravity.[10]

Gravity Push: The user is able to make objects to be repelled by them, changing the amount of gravitational force between them and others, which effectively makes the object fly away with great force from them. It becomes useful when the user has their movements restrained by something like a rope.[11]

Flight: This ability can be used to allow the user and other bodies to levitate above the ground.[6] Once in Zero-G, the user is able to fly around freely, matching attractive forces to the direction where they are going to. While flying, the user is also able to deliver powerful flying attacks enhanced by gravity, that are strong enough to make a Mavro bleed.[14]

It's common for users to perform hand movements in order to have a more precise control over their powers, normally with their arms extended and the hand's palm faced to the side where the gravity is being manipulated.[19] However, this isn't a requirement, as the user can freely use their powers even if restrained. In addition, when using the power of the Apple, the stitched smile-like mark of the Apple appears on the user's eyes' lower iris. 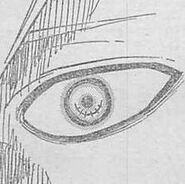 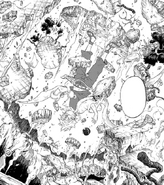 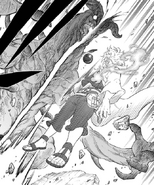 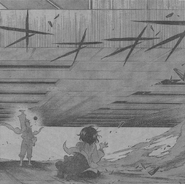 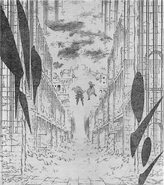 With the assistance of the Blood Manipulation power of the Landsteinerian Paint, a hybrid user who possesses both human and Mavro blood is able to enhance their Eureka-compatibility and achieve a greater level of power.

When in this form, the user of the Newtonian Apple gains the distinguished stitched smile-like mark of the Apple crossing their face at the left side, from their forehead to their chin. The same mark can be observed crossing their hands horizontally. The user's irises also get darker when in this form. 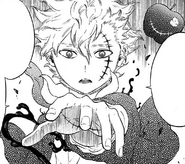 Heidi's appearance when in the Enhanced Form. 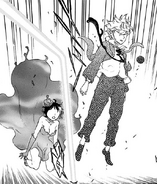 Crushing Wave: Once Heidi and Alan activate their powers, they're able to produce a devastating sonic wave that crushes everything in every directions, except in a small are that protects themselves and allies. They stand in the area as well, each one pointing to a side where the wave is being created, therefore creating an Omnidirectional Wave-Shaped Destruction. It was strong enough to destroy everything, from the floor to hard wreckage, inside a White Joker's base.[23]

Disintegrating Slicer: Another move enhanced by the combination is the Air slicer: Heidi does the same hand movement to cut the target with air, and, after being cutted, sound vibrations are reverberated on the cutting local, that cause the destruction of the molecules of the target's body, disintegrating them.[24] 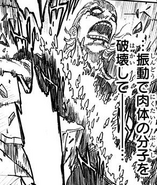 The effects of Heidi's disintegrating slicer.

Aqua Cage (, Akua Keiji): A huge mass of mist is produced around the users, effectively hiding them in the mist while they prepare the attack, that consists in surrounding the target with such mass of mist in the shape of a dome, and then using the gravity to increase the mist's pressure in order to condensate it and create a giant water dome to trap the target inside. Other portions of mist also get condensed, making giant water bubbles to surround the dome as well.[26] 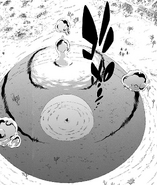 Heidi and Nils creating a dome made of water. 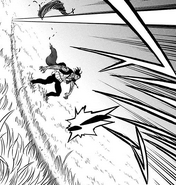 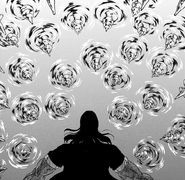 Dodomekis about to be hit by Cage Violate attack.

Around the 17th century, the Apple fell from a tree in Isaac Newton's garden while he was sitting under it. He noticed it, picking it up and seeing that it appeared to have been bitten, as there was a missing part flowing some of the Apple's juice. He decided to drink it, and as he was an adapter chosen by the Apple, he gained the knowledge about the Universal Gravitation, later becoming famous for writing the theory about it. His contact with the Apple would become a legend in which he realizes the theory by seeing it falling.[4]

The Apple would later appear in Heidi's early past, lying, bitten, in the ground of an area covered by Glowing Corpses,[29] where Heidi and his Mavro brother, Nacht were the only alive.[30] Heidi collected the Apple and started to study it and the Glowing Corpses to find out about his own past, later awakening its powers to defeat James and revealing to be an adapter.

The Apple's power and characteristics are based on a popular story when Isaac Newton saw an apple fall from the tree and used that particular phenomenon to come up with the "Law of Universal Gravitation". The truth is that the movement of the apple falling from a tree led Newton to question why it always went towards the ground, thus inspiring him to study the phenomenon.

Sir Isaac Newton (25 December 1642 – 20 March 1726) was an English physicist, mathematician, astronomer, natural philosopher, alchemist and theologian who has been considered by many to be the greatest and most influential scientist who ever lived. In his monograph Philosophiæ Naturalis Principia Mathematica, published in 1687, Newton described universal gravitation and the three laws of motion, which dominated the scientific view of the physical universe for the next three centuries.

Retrieved from "https://hungryjoker.fandom.com/wiki/Newtonian_Apple?oldid=11868"
Community content is available under CC-BY-SA unless otherwise noted.